Being heathens/atheists, it's difficult to participate in customs that don't carry any personal significance. And for some reason it feels worse to only indulge in the fluffy side of the rituals, like the easter bunny. Alas, that is all we did this year: colored eggs, anticipated the coming of the Bunny, and then ate his/her/its chocolately offerings.

The Easter bunny (me) accidentally left all the chocolate in the car the day before easter and the beautifully formed chocolate bunnies I had purchased, melted. Luckily, the kids didn't seem to notice the mashed nature of the little creatures and enjoyed them all the same. (PS: no baskets here...we used bowls.) Such a lazy Easter Bunny. 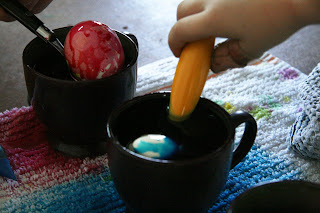 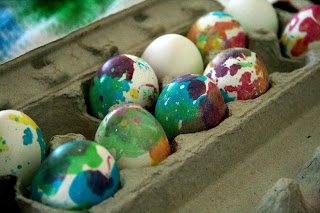 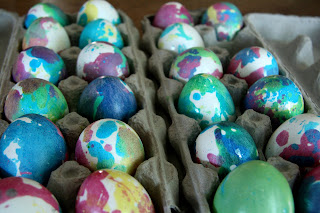 Complete!
Posted by Astrid Rose at 6:44 AM 2 comments:

In no particular order... 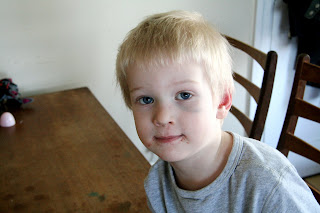 Nev. With a black eye (he mysteriously fell on his face-he takes after his mother) and chocolate embellishments. 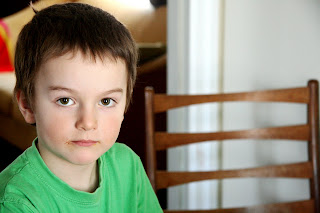 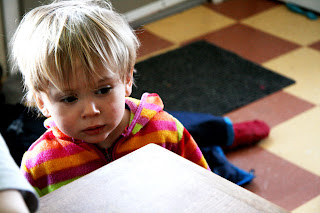 Well, in six years of having children, this is the first time one of them has had a significant illness, significant enough to make a parent want to vomit, to not think, to look the other way. I've considered myself very lucky. I've also figured it's only a matter of time before someone gets something.

This morning, looking grave, The Plastic Surgeon walked onto the boat. Wow, I thought, it's not often that she looks this stressed. Seconds later, she turned to us and said: "Well, the consensus [herself and the dermatologist] is that we're going to treat it like a melanoma. So, I'm going to take him back into the OR and remove a wack more skin, which will need to then be grafted. But no lymph node biopsy." We then went on to discuss where she would take the graft from: the groin? No, as he risks growing pubic hair on his hand. From his wrist? No, as he'll look like he attempted suicide as a teen.

This will be a longer operation, with bigger wounds. I'm not sure what to think. I'm pleased that they are taking it seriously, being cautious, and treating it like cancer. In the same breath, it fucking freaks me out that they are treating it like cancer. When future doctor-people ask, "any significant childhood diseases in his past?" do I say "yeah, melanoma?" Fuck. It makes my mind spin. However, I also thank my lucky stars that this is all that it is. And that Dex probably won't die anytime soon, from cancer at least.
Posted by Astrid Rose at 6:27 AM 1 comment:

One and a half weeks ago Dex had the minor surgery to remove the growth on his thumb. For a 10 minute actual operation, we were at the hospital for five hours. This included check-in, waiting to be called to the OR, putting him under (which I got to witness), the operation, and then waiting for him to wake up. Dex was very brave and didn't cry once. Duncan and I were very brave too, not realizing how emotional the whole event was until after the fact, when we found ourselves exhausted. Since then, we've been tending to his wound with daily applications of polysporin and not two, but three bandaides.

Yesterday we (me and the three boys) went back to The Plastic Surgeon for Dex's one week post-op check-up. She spent the first little bit cleaning up the wound and removing the last of the dissolving stitches. As she was finishing up, I asked "So, did they do a biopsy?" fully expecting her to report a confirmation of the "hari-horrible-itis." Instead, she grabbed the pathology report and came in close: a doctor's way of saying "you're going to need to sit down for this."

"It's not what I expected," she said. Okay. "It's a junctional spitz nevus." Okay. "And there is some controversy about it's diagnosis. It could be a low-grade melanoma. I've referred him to a dermatologist to see how she thinks we should proceed. The question is whether or not we should biopsy his lymph nodes."

"Don't freak out Yet" she said.

So, I took the boys for sundaes and tried not to freak out.
Posted by Astrid Rose at 6:36 AM 2 comments:

FOR THE LOVE OF HUMANITY, WINTER FUCK OFF, FOR FUCK SAKE.
Like the end of a pregnancy, when you've resigned yourself to being pregnant FOREVER, that this is your new state of always being, I have resigned myself to winter. Spring will never come. It does not exist.
Posted by Astrid Rose at 7:52 AM 3 comments: