Halloween 2007. The kids have been out of their minds with excitement for Halloween for the past month. I wish I was exaggerating. But I am not. They were writhing on the floor with anticipation when I got home from work tonight. So, we stuffed a few bites of nutrition in them while waiting for dark, piled into the car, drove to the village and spent about an hour slowly (oh so slowly) walking about seven blocks and collecting about one full bag (grocery bag) of candy. We got home at 8:30, about 1.5 hours past bedtime. In good "we've had too much fun" fashion, Neville had a pre-bedtime hysterical meltdown when I denied him his demand to "eat all of his candy NOW!" I tried to assure him that tomorrow he could eat it until he vomits but his exhausted brain could not compute. On the way home Dexter said: "I can't wait for next year's Halloween!" Only 365 more sleeps. 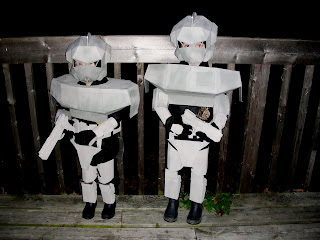 Duncan spent approximately 4 solid days (and nights) making this year's Halloween costumes for the boys. They are robots, and the costumes are made out of paper and cardboard. The best part: on the helmets there are tiny lights that run along the peak to light their way. Pretty much the best costumes ever!
Posted by Astrid Rose at 7:18 PM 1 comment:

Because the kids will be coming into my lab on a semi-frequent basis, I decided to make them their own lab coats (from junk lab coats). Here are the results! I'm especially impressed with the teeny-tiny Lew sized coat. 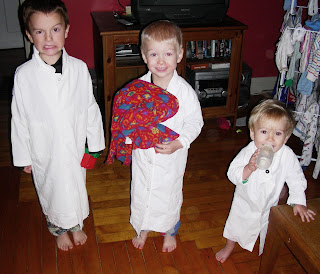 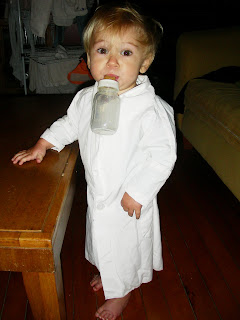 This weekend I helped the kids make their own pizzas. I didn't realize how much they would enjoy it. They even ate more than usual. So I guess that nutritionist (the one that makes me feel like I'm a crappy parent) was right: getting kids involved in food preparation is good for them. I should do this more often. Dex even proclaimed he wants to learn how to cook. Here is a window of opportunity that needs to be taken advantage of. I'm having fantasies of my seven year old cooking me suppers. Unrealistic? 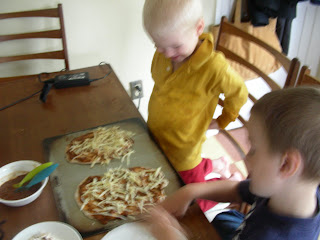 Next Step: Three course meals.
Posted by Astrid Rose at 7:16 AM 1 comment: 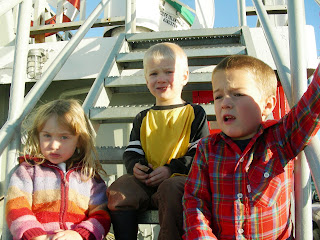 Chillin' with their g-friend, Gwen, on the boat in the late afternoon sun.

That's Canada talk for Damn Hot! So, we raked some leaves and jumped in them barefoot. A definite first! 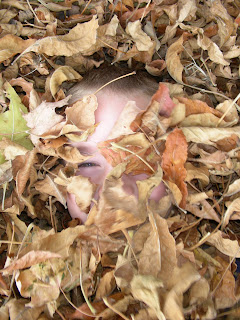 Dex, in there somewhere. 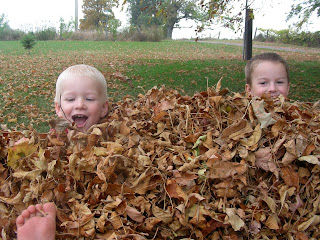 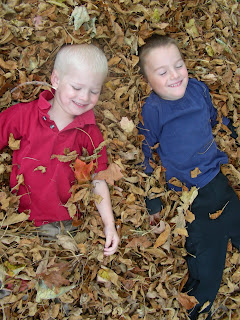 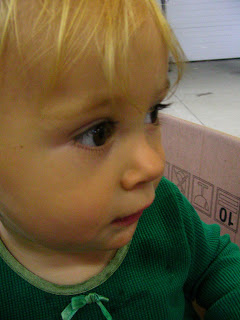 Lewis is growing! He's got some of his first-year molars, he's waving bye-bye (a little late yes, but doing it nonetheless), he's nearly one sleep away from having enough confidence to start walking, and I think he has some words that include ball (bah), banana (nana), cat (dat), milk (mmmmm--okay, that may be stretching it). He needs to have ten (at least) by 18-months...but I'm not going to worry about it if he doesn't. Very recent development: he has separation anxiety! I know, it's crazy that he hasn't experienced this yet (at 15 months) but he's been a VERY mellow-fellow. I saw it for the second time yesterday at the in-laws' Thanksgiving bonanza as he was shy and clingy around all of the unfamiliar faces.

While he's on his own Lew-developmental-curve, he's developing. Yay Lew!
Posted by Astrid Rose at 9:45 AM No comments:

It just isn't Thanksgiving without a tank battle. 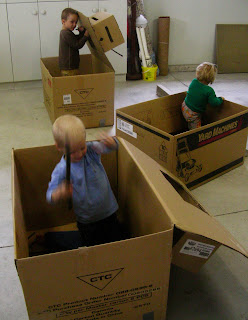 Thanksgiving Fun in a box
Posted by Astrid Rose at 9:42 AM No comments:

Look what I made! 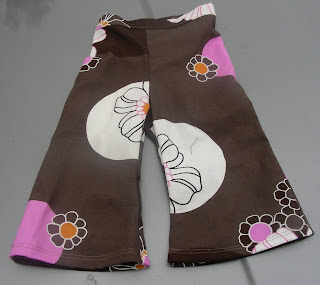 This is one of the first real pieces of clothing I've made. I even designed my own pattern. I think these are 2T size (judging by how they fit Lew). Next, I'd like to make some smock-dresses! Now all I need is a little girl. (Or a little boy who likes to wear girl's clothes.)

The other day I started my training sessions to learn how to handle the rats. The trainer told us to wear old clothes. I just could not for the life of me imagine why. Blood splatter? is all I could think of. Turns out that when rats are freaked out, they pee and pooh, A LOT. Our homework: doing checks (for food, water, and health) every day (no skipping) for the next six weeks. Yay. 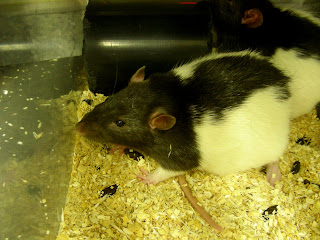 Rat number Eight
Because I have to go in everyday to monitor these little guys, sometimes it means that I have to take my babies with me. There are strict rules on the "4th Floor:" you must wear a lab coat at all times and you must wear booties. This is to keep the rat germs contained. It also means that I have to dress my tiny people in big huge lab coats (challenging). I've taken the boys twice and let them handle the rats. They were impressed, said they were "fluffy" (a strange descriptor) and were fascinated with their very large testicles. This precipitated a talk about the differences between boys and girls. I try to discuss girl anatomy whenever I get a chance as I feel responsible for educating my boys about clitori (multiple clitorises?). This was the boys' first time hearing the word "clitoris." I'm definitely going to be the weird mother who brings everything back to "sex talks."