Fruits of my labour 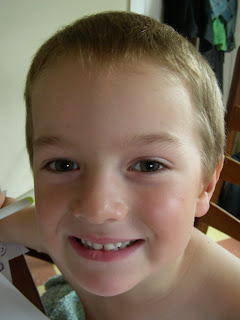 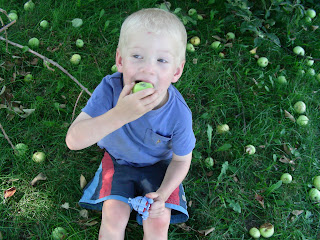 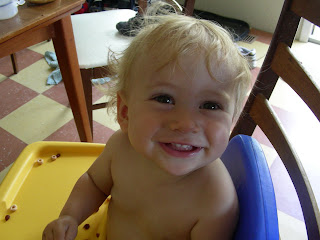 Dexter goes to the Dentist

At five, Dex has never been to the dentist. Today was his first visit.

Frankly, I was mostly worried about how guilty the dentist would make me feel about NOT being very diligent about brushing my kids' teeth. I'll be honest, we try. But sometimes it's hard. (I think that's the excuse the Canadian government gave for not doing something about global warming.) So really, we pretty much don't try that hard. I would say 80% of the time, Dex and Nev brush once a day, at the end of the day and poor Lew, I just realized, we rarely (read: Never Have Yet) brush his. Bottom line: there is much room for improvement and lots to feel guilty about. So I braced myself for the visit, realizing that probably, Dex would have cavities and they would be all of my fault.

Nev and I accompanied Dex while he had his appointment. He did a great job, got his teeth x-rayed and even let the dentist in his mouth. What we found out: Dex grinds his teeth, he'll probably have some crowding when the permanent teeth come in, it will be a while before his baby teeth fall out, and the Monday Miracle: NO cavities.

This is like putting off writing a paper until hours before the deadline, throwing something togehter at the last minute, and making an A: positive reinforcement for bad behaviour.

My first inside reaction was pride: I'm such a good parent. I should probably find another parent to brag about my amazing parenting skills. This feeling made me recall when Dex was a baby and started sleeping through the night at about eight weeks. I also attributed this to "my incredible parenting technique." (In my mind of course.) I soon realized my "skills" were imaginary and my parenting style had absolutely nothing to do with it (when, of course, he stopped sleeping). And so it is with the cavity-free status. Instead of feeling smug, I decided I'd just feel happy that I didn't have to see Dex suffer through the filling(s), and try to achieve the same cavity-free status on the next visit.

To achieve this means:
a) brushing twice a day and
b) giving the kids fluoride drops.
(Note to self: remember, Lew has teeth too!)

I'm sure I'll be able to keep this up for approximately one day.
Posted by Astrid Rose at 5:37 PM 2 comments:

Milestones not talked about

By the time the third kid is born, you barely notice all those "first year" milestones (rolling over, passing things from one hand to the other, sitting, talking, walking, etc). Except of course, when they don't happen. Both Dexter and Neville did most of the milestone-esque things well ahead of time: Neville walked by 10 months, and Dexter talked in full sentences by 18. Lew is in no hurry. At all, on any front. At 14 months, he is still a total crawler and has zero words and doesn't seem to be understanding much of what we say ("where's your nose?" gets only a smiling face). He didn't sit until 9 months and didn't eat any solids at all until 10 months (despite my efforts) . There are moments of worry that he's delayed. But (I tell myself), there is a huge range of "normal" and Lew does seem to be on his own little developmental curve that keeps moving forward, just at its own pace. And besides, wasn't Einstein considered "slow?"

The milestones that I really want to talk about are different than the developmental ones above. I want to highlight parenting milestones, the ones that there are no books for. Like, surviving your first multi-child vomiting-poop-fest illness while having it yourself, or losing your kids (yes, all of them at once) in the department store.

Here are our recent parenting milestones (warning, these are kinda gross):

1. Balanitis: that would be inflammation of the foreskin. None of my boys are circumcised and up until a month ago, this has not been a problem. I hardly gave a thought to the little foreskins running around the house. Until one evening, when I unwrapped Lew's diaper and found a raging, ulcerated, pussing, wound-like sore on the tip of his penis. It was large and looked horrible. I panicked: my child's penis is going to rot off. He'll be a penis-less freak. I resisted the urge to run screaming to emerg and took him to the doctor first thing the next day.

What ensued was 2-3 weeks of multiple percriptions and doctor consults to battle the persistent "infection." At first the doctor said, "well, one bout of balanitis does not instantly call for a circumcision." Three weeks later we heard: "well, if this next anti-fungal doesn't work, I'm referring him to a penis-ologist and he'll need a circumcision." In an effort to try to figure out the problem, it occurred to me to try paper diapers until the infection passed. Zappo! Two days in disposables and it was a thousand times better. But was it the paper OR the anti-fungal? Returning to cloth only brought a return of the inflammation. And then child number 2 started getting balanitis from wearing the cloth overnight. I'm feeling torn: happy that he will not need a penile amputation, sad that the cloth diapers and overnight wear are the problem (my beloved cloth diapers). Interestingly there seems to be an absolute lack of information on the internet about balanitis and cloth diapers. Outcome: I've decided to change detergents, only use cloth during the day, and hope for potty training (the last one is a joke).


Brace yourself for the second milestone:

2. Pinworms. This is an intestinal parasite. They are worms. And they get pooped out. And they are plainly visible, squirming away in the poop. Eating dirt is the best way to contract them. Better yet, eat some cat poop and you'll get them for sure (Lewis actually did eat cat poop). They are beneficial, thought to boost immune systems preventing allergies and depression. I knew one of the kids would get them, sooner or later, and I was wondering how it would all happen.

Well, it went like this: I discovered them shortly before breakfast while I was washing out Lew's poopy diapers one morning last week. A quick trip to the drugstore, a small does of pinworm killing medicine for all kids, and it seems they are gone. For now. Although the images of the worms permanently burned on my brain have given me a mild case of post truamatic stress disorder.

I'm sure there are many more of these "parenting milestones" yet to come. I'm giddy with anticipation.
Posted by Astrid Rose at 5:32 AM 1 comment:

The Children:
I've got three boys, Dexter (5), Neville (3) and Lewis (one). Someone is always pooping, hungry, thirsty, getting hurt, ingesting non-food items, climbing furniture, peeing, playing in the toilet, fighting with each other, asking for candy, and spilling milk. And that's usually all going on in any five minute window.

The Parents:
I'm six months into 30. Currently, I work three days a week as a researcher in Neuroscience. That will change however, as I've just signed up to begin a PhD. (in Neuroscience) this fall. In fact, I officially start on the fourth of September. I plan to work 10 hours a week at my old job (researching), do my required course work, development my thesis, be present to raise my children, make all of my food from scratch, and continue my small on-line business (a hobby) of making and selling things made of fabric. And in 2008, we want to have another (our last) baby.

To add the the insanity, my husband Duncan (45) just started his own private practice in Neuropsychology this past June. Due to the feast or famine nature of the work, our fears of being hungry and homeless, and the "growing" phase of the business, he takes ALL work that comes his way, which means he's often traveling to other cities for a few days at a time each week. Some weeks I feel like a single parent and only see him a few minutes every other day. Other times, it's like he's a stay at home Dad. Often he stays up all night long working on deadlines.

Our current joke is that on a scale of 0-10 of intensity, we're at "fucking mental:" the setting at which you just go, go, go until your body bleeds and your mind breaks down. Presumably, one cannot go at this intensity for long. But this IS the life we choose. And as crazy and chaotic as it may be, I like the intensity of living full and living hard.